The Evolution of Significant Other

The Significant Other Festival began as an idea to see two characters on stage talking to each other, no tricks, no flashy gimmicks, talking about their feelings, their hopes and dreams. While you might not think the people look or sound like you, you could relate to what they said and how they felt, because you may have said something similar and felt the same way. We wanted to make that connection to highlight that underneath it all we’re not so different.  Out of this idea grew an ethos, an ethos that became our mission statement and still informs everything we do today.

The first Significant Other Company

That first Significant Other, was 7 duologues, where we gave both the writer and then the actors and directors 7 days each to work on their contribution. It still all began with what we now call our Inspiration Session, a high energy few hours where we bombard the writers, actors and directors with as much as we can sending them away with their heads buzzing. I remember so vividly on the Sunday of our 3rd performance having to make my entrance from the side walkway next to the audience and struggling to get to my start position because there was a crowd of people standing to watch our show. It was an auspicious beginning for us, on that show we met so many of most treasured PenFedders. It was also how we first met Serena Haywood, who would go on to be our Literary Director. Our Company Stage Manager Davie Byden-Oakes also gained his first experience of working on a show and from that he has embraced the theatre so going on to study at LAMDA and most recently has just finished working on Fanny and Alexander at The Old Vic. We had 7 props that year, and what started as a practical consideration, we didn’t want to spend a week searching for random props, became a wonderful linking tool between the pieces and was one of the elements we carried forward.

Significant Other – Genres was the second iteration of the Festival and we made the change to the now familiar 10, 10 minute plays in 10 days format. We kept the idea of the same props, and they got upgraded to 10. One prop however became the stuff of legend, and illustrated to us just how if you give writers enough variety they will find the most varied uses for one single prop. Of course I’m referring to the lettuce, which gave us one of my favourite exchanges ever from writer Will Howells,

ALLIE     DO YOU HAVE ANY SMALLER LETTUCES?

PHIL       THAT’S THE PROBLEM WITH THE ICEBERG LETTUCE.

PHIL:      NINETY PERCENT OF IT IS BELOW THE SURFACE.

And speaking of Will Howells, he would go on to write our first full length play Square which earned us our first 5 star reviews. The first musical also appeared to great success and now every year features a 10 minute musical. We also met the one and only Kim Burnett and in many ways she hasn’t left us yet and even if she’s not acting we find some way to incorporate the spirit of Burnett. 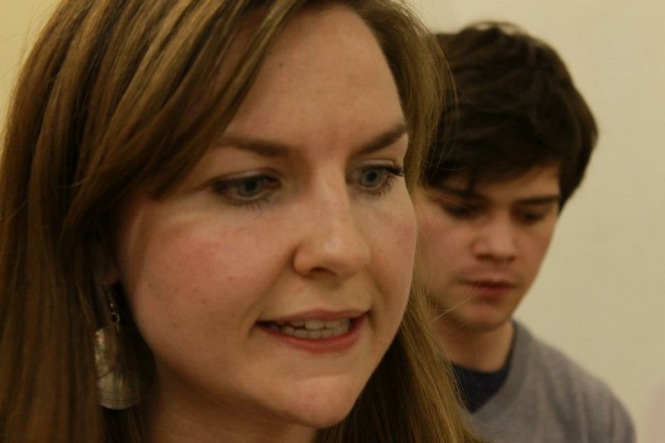 The amazing Kim Burnett and Theo Ancient from Significant Other Genres

Then came Significant Other – Undercover. We were starting to be known as the festival of two chairs, so we mixed it up and gave our teams the inspiration of having a bed. However it was very interesting how everyone avoided using the bed, apart from the wonderful Michael Shon who’s vigour resulted in us having to construct elaborate support system for the bed. It also memorably gave us the death of a puppet dinosaur Suzy, in of course the musical. It was also where we met our first associate artist Jared Rogers playing the charming younger man in Silk. Every team was given a covering that also became the title of their play, another element that we now carry forward every year.

The covers of Undercover

Object of Affection was Significant’s fourth outing, and we returned to The Tristan Bates Theatre which would be our home for the next few years. Every team was given a specific object to create their play around, and it resulted in some brilliant pieces, and gave us our next associates the wonderful Anthony Cozens and Jayne Edwards. The last piece ‘Life-size Cardboard Cut-out’ made quite an impression on us, even as 2D Han Solo the introduction of a third character gave a completely new dynamic. So often over the years the ‘Significant Other’ character had been an unseen off stage character. This brought it on stage and gave us an idea.

The obligatory introduction circle of ‘Object of Affection’

For our 5th year as a company we wanted to go bigger, and Significant Other – Plus One made that a possibility. Having a cast of three brought more conflict and that Significant Other on stage and gave them a voice. It was one of our favourite reveals in the Inspiration session, we had got the teams all settled and then revealed the plus ones, to an astonished reaction. It gave us one of our most memorable musicals starring our brilliant associate Antonia, who i had the joy of giving the direction, ‘channel your inner Liza’. Now having 3 actors has become the standard as also has bringing back a few brilliant people into the mix, if nothing else it adds a level of reassurance to everyone that it can be done. Also this year we ventured up north to the Oldham Coliseum and worked with local artists on Significant Other – Relationship Status, this was another confirmation for us that the format really worked.

Plus One gave us the chance to welcome back previous Penfedders here is Ben Carpenter (centre) with Rowena Bently and Luke Lampard.

Last year we took another leap of faith, we graduated up from the 80 seat venue into the 150 seats that the Vaults Theatre under Waterloo Station offered. Again we wanted to be bigger, we also wanted to try and connect the plays even more than before, to really give the audience a sense of a cohesive evening of theatre rather than just a disjointed night of shorts. The idea of the outside came fairly early and the weather related titles soon after that. As the plays came in, we could see the connections, in the reading and dramaturgy that goes on in the first 5 days, Serena and myself get excited as we see the themes begin to emerge. We began to imagine all the plays taking place in the same universe and subtly we tweaked a few character names and helped the writers lay easter eggs for our audience. Then in a burst of inspiration we staged an opening where one by one the characters all appear giving us a glimpse of what was to come. That opening montage stayed with me and led to a new idea. What if we set all the plays in a specific time and place? A place where lots of different people mix and meet? What if we set in a time when our Prime Minister told us ‘..there is no such thing as society’. So that brings us to Significant Other Inc. This year we tell 10 stories all set in the fictional factory of Reseal9 on one day in 1988. We’ve never attempted anything like it before, and we hope you’ll come and see it; hey you might even want to be in it. If Significant Other is all about connections, it’s about time it was all connected.