We’ve been busy bees (which is our excuse for the long overdue blog post) but we are absolutely thrilled to welcome a third addition to the Pensive Family.  How did we get there? Read on…

After performing at the Camden Fringe 2011, we were at a crossroads.  Pagan Love Songs for the Uninitiated was about two disconnected souls; we knew that we were interested in exploring the connections between people; the spoken and unspoken communication with real and relatable characters; great stories, simply told.  This all fed into our company mission but what next?

We wanted a new project, like-minded artists and an audience. 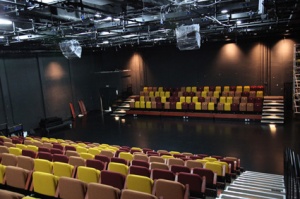 The Significant Other Festival was the answer and while at times we worried that it was a massive jump up from our little two-hander, it felt like a natural progression.  We were overwhelmed with the response especially by the quality of artists that were interested in the project and our ethos.  People even started to describe things as very PenFed or not so PenFed. As the project progressed, phrases like ‘extraordinary in the ordinary’ and ‘magic in the mundane’ came flowing out of us as we solidified – no – crystallised what our company stood for and the theatre we wanted to create.

The final result was not just 7 well crafted, beautifully written and excellently performed plays but friends, future collaborators and the beginnings of an idea that would become The Collective Project.

Out of this, we also gained a significant other for The Pensive Federation – Dr. Serena Haywood, one of our writers who understood instinctively what we were trying to achieve and shared so many of our thoughts and ideas about what theatre could be.  Also the journey to her craft had echoes of our own.  As a company that aims to focus on new writing it made sense to have Serena on board to contribute the writer’s perspective.

We gathered together and made her a proposition- one which, in our opinion, couldn’t be refused.  But in classic writer style she built the tension by asking us to wait a few days.  So we did just that with fingers crossed.  Our patience was rewarded as Serena accepted and became one third of our creative team.  You can read all about her here.  We are delighted to officially welcome her on board.