In the third of our blog series “A Different View” Oliver Britten writes about his adventures with us as an actor in the Significant Other Festival.

#significantotherfestival. A hash tag, I became very familiar with over the course of the process.

A mark to brand my sheer enthusiasm over an event I was desperate for people to see, and desperately proud to be involved in. Why? Because unlike so many un-paid, freelance acting jobs, this was a gig not just for the show reel, not just for the ‘experience,’ not just for the, ‘networking’ potential but for the raw talent, the originality, and the absolute unrelenting fun that was inherent throughout.

The process was simple: 7 writers, 7 Directors, 14 Actors, 2 producers and 7 days. The end result: a one-hour show consisting of 7 plays all 7 minutes long.

It began with a meet and greet; A chance to meet everyone selected for the festival.  You had the actors: the usual crowd of eager beaver show-offs, some new faces some old, all hungry to shine.   And shine they all would.  The writers: An oft’ varied bunch, some more apparent than others with a funny hair cut and a pencil behind each ear -should an inspirational moment grab them by the balls and result in a literary ejaculation so formidable as to release a whole pencil of its led, they would at the very least have another one to hand- some less so, lurking in the shadows observing with a mild grin, and a tilted cap so as not to reveal their innermost thoughts and ideas to the hoard of creatives’ desperate to embody, to become and to harness whatever may fall in their way.   And the directors: A band of leaders, visionaries, ready to lead their performers down a path of discovery and wonder with whatever script was eventually set before them.   Of course hyperbole aside, there was something in the air, a distinction between each group that hinted toward a truly well selected crowd of individuals ready to take part in a team within a team.

After some typically hilarious but ultimately necessary warm-up games, we were ready to test the waters.   A random pairing saw myself teamed up with a lovely young actress and given a few minutes to rehearse some original material constructed by one of the writers in the building (we did not know who).   After this brief period, every pair was allowed to perform this to the entire group.   It was a truly fantastic exercise, as everyone in the room was both a performer and an audience member (except the directors but more on that later).   The writers on display by proxy, and the actors on display more obviously, were all totally vulnerable and yet totally safe, in this cocoon of shared creativity. It was clear that this exercise wasn’t just a chance to showcase all the talent in the room, but to pull together a group of relative strangers into a place of intimacy and respect.   Aside from this we were subconsciously digesting the format for the whole festival.

After this seemingly ceremonial (and might I add) hugely entertaining activity we were briefed in the team structure (1 Director, 1 writer, 2 Actor/ress’s).   All 7 groups were then told they had 7 minutes for the writers to write a piece, and a further 7 minutes for the actors (with direction from the directors) to rehearse this new material ready for performance.   This was the real pre-cursor to the following week and here we were really allowed to feel the full pressure and weight of what we were about to embark on.

As before, the resulting’ show’- as it were- was fantastic, and everyone was thoroughly amused and suitably impressed with all the actors, writers and directors.   This was a superb finale to a great day and I can remember being oddly satisfied at the bizarre juxtaposition of inspiration and entertainment I was left with upon my departure.   Left with a one-day-only rehearsal schedule and a few contact details I was off.   Excited and raring to go, I couldn’t wait to get stuck in.

The rehearsal process went by in a flash and before I knew it, I was standing in the green room, script still in hand, lines half learnt, play half rehearsed, with a belly full of nerves and Chinese food. Chinese food I probably shouldn’t have eaten 10 minutes before the first performance of a 2-day, 5- show run in a ridiculous festival I’d stupidly signed up for. Or at least that was my thinking at the time. 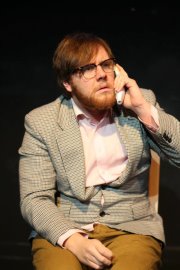 If I thought the rehearsal process was swift I had another thing coming, my 7 minutes on stage went by in a flash of the flash that the rehearsal process went by in.   In a flash of the rehearsal was the new flash of my old flash wasn’t even a flash compared …fgueifbwsfgwuqid;/. Great I’ve confused myself, and let me tell you I was confused when I left the stage. Not only had we managed to deliver a respectable piece of theatre, challenging, enjoyable and hopefully highly amusing, but we had managed to remember our lines, the blocking, the stage craft, when to pause, when to move, how to flipping speak!  It seemed like we had so much to do, and so little time to do it in.  But we had done it.  In seven days we had created theatre and we weren’t the only ones.  Every group had produced something brilliant, original and immensely enjoyable.  It wasn’t long before that feeling of confusion was instead replaced with joy, elation and relief.  Not to mention a seriously overwhelming desire to do the whole thing again!!

And that sums up the Significant Other fFstival in general really. It’s a fantastic opportunity to meet some incredibly talented and lovely people, a privilege to be involved in new innovate theatre and a great way to challenge your ability and resolve in your chosen career.  On top of that and maybe most important of all though, it’s hugely fun! It’s made a significant difference to the way I view theatre and I cannot wait to do it again.